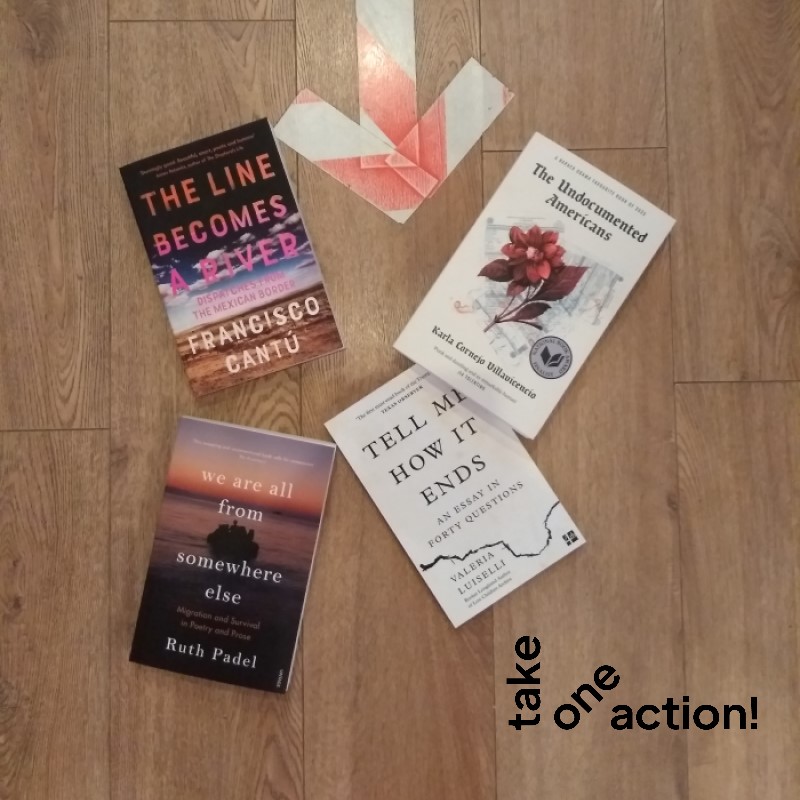 'Watch, Read, Think, Act' is a collaboration between Lighthouse and the stellar team at Take One Action, the UK’s leading global change film festival.

Once a week, starting on Aug 23rd, one of our booksellers releases a new reading list - attached to five of the brilliant, thought-provoking films featured in this year's Take One Action program. Our hope is that, whether you read a book - and it helps you get even more out of the film in question - or a film inspires you to learn more about its themes, communities and places, ultimately these stories will empower you to instigate change alongside others, and do whatever you can do to re-shape the greatest stories around us.

This week, for our fifth innstalment, Peach watched On The Line. Here are their thoughts on the film and further reading:

On the Line is an incredible documentary, following the lives of people who have been deported from the states to Mexico, despite never having lived in, and having no friends, family, or support network in Mexico.

It examines the detrimental effect on the mental health of those who are separated from their families, essentially forced into a solitary life. We see their lives through the lens of 'lines' - through the phone. They work in call centers, one of few ways they have contact with the US. We also see their heartbreaking communication with family members, wives and children through personal phone and video calls, and their increased upset, depression, exasperation, and despair.

This is a documentary on the real impact of deportation - using human beings as political pawns. This is a humanitarian crisis, and one that cannot be ignored. Empire of Borders looks into the international reach of US deportation practices, with a large focus on the highly publicised US-Mexican border wall as a cover up of an international attempt to infringe on the rights of peoples worldwide. Border & Rule looks into deportation, and enforcements of borders as a product of capitalist globalisation, and the climate crisis it has fueled.Undocumented Americans follows the lives of those people whose homes are in the States, but are deprived of rights and as a result, of compassion from the wider American community. It displays, however, the communities built, and love shared, of undocumented Americans who come together through a deep understanding of one another's pain and fear, but also of love and hope. (You can watch the author Karla discuss her book with Leah Cowan, over HERE)

To look further into deportation as a crime against humanity (which it most certainly is), I would recommend Deport, Deprive, Extradite by Nisha Kapoor. Although not a direct examination of US-Mexico deportation practices, it similarly follows the lives of men who have been the pawns of an international authoritarian project.

All books are available to order from Lighthouse. Tickets for On The Line are available from Take One Action HERE, where you can read all about the film.

If you're interested in conversations about borders in the UK we also have a reading list on The Nationality and Borders Bill: Making it Illegal to seek safety

title
Empire of Borders : The Expansion of the US Border around the World
author
Miller, Todd

title
Tell Me How it Ends : An Essay in Forty Questions
author
Luiselli, Valeria

title
We Are All From Somewhere Else : Migration and Survival in Poetry and Prose
author
Padel, Ruth