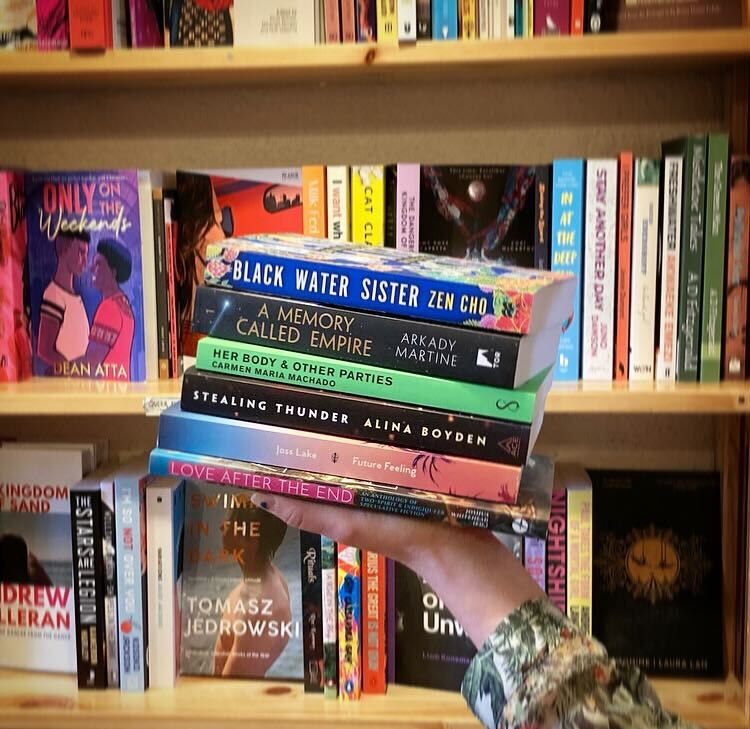 For Independent Bookshop Week, we invited some of our author pals, local and from further afield, to take over our Instagram account for an hour, recommending books on a chosen theme or in a chosen genre. In case you missed, we’ve published a list of each author’s chosen books (alongside their own work!) here on the website. We’re lucky to know some pretty splendid folk!

Eris Young is a queer, trans writer of speculative fiction and nonfiction. Their short stories have appeared in Escape Pod, Fusion Fragment, Metastellar and Pseudopod, among others. They are fiction editor at Shoreline of Infinity science fiction magazine. Their first nonfiction book, They/Them/Their, was published in 2019 by Jessica Kingsley, and their second book, Ace Voices, will be out in December 2022.

Love After the End, edited by Joshua Whitehead: An uplifting and visionary anthology of two-spirit and indigiqueer speculative fiction, many of the stories offer portraits of a dead Earth from which new life springs, hinting at a way forward through the darkness of the present.

Her Body and Other Parties by Carmen Maria Machado: Only published in 2017, this is already a classic of queer speculative fiction. Machado&#39;s work is equal parts gorgeous, visceral and frightening: she pulls no punches!

Future Feeling by Joss Lake: A hilarious, messy romp following three trans guys in a near-future, queer-hivemind-connected USA: it's rare to see trans men as the protagonists of stories (let alone three) and even rarer for them to be (endearingly) total scumbags!

Stealing Thunder by Alina Boyden: A hijra princess in fantasy-Mughal India plans a heist to steal a dragon: what more could you want!

title
Her Body And Other Parties
author
Machado, Carmen Maria

title
They / Them / Their : A Guide to Nonbinary and Genderqueer Identities
author
Young, Eris

title
She Who Became the Sun
author
Parker-Chan, Shelley

title
The Priory of the Orange Tree
author
Shannon, Samantha