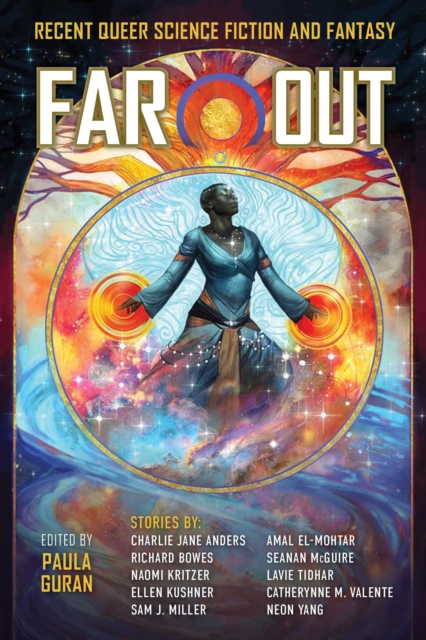 An Anthology of Recent Queer Science Fiction and Fantasy from Award-Winning Editor Paula Guran Speculative fiction imagines drastically diverse ways of being and worlds that are other than the one with which we are familiar. Queerness is a natural fit for such fiction, so one would expect it to be customarily included. That has not always been the case, but LGBTQ+ representation in science fiction and fantasy-in both short and long form-is now relatively common.

Even so, most of the queer science fiction and fantasy anthologies published in the last thirty-five years have been narrowly focused: specifically gay male or lesbian (or, more recently, transgender) themes, or all science fiction or all fantasy, or adhering to a specific theme or subgenre. Far Out: Recent Queer Science Fiction and Fantasy, on the other hand, features both science fiction and fantasy short fiction from the last decade and includes characters, perspectives, and stories that span the rainbow. With stories from incredible authors ranging from Seanan McGuire to Charlie Jane Anders to Sam J. Miller, it's an essential read for anyone interested in queer science fiction and fantasy. ContentsIntroduction: Over the Rainbow and into the Far Out by Paula GuranDestroyed by the Waters by Rachel SwirskyThe Sea Troll's Daughter by Caitlin R. KiernanAnd If the Body Were Not the Soul by A.

AndersonThe Deepwater Bride by Tamsyn MuirThe Shape of My Name by Nino CipriOtherwise by Nisi ShawlThe Night Train by Lavie TidharOurs Is the Prettiest by Nalo HopkinsonDon't Press Charges and I Won't Sue by Charlie Jane AndersDriving Jenny Home by Seanan McGuireI'm Alive, I Love You, I'll See You in Reno by Vylar KaftanIn the Eyes of Jack Saul by Richard BowesSecondhand Bodies by Neon YangSeasons of Glass and Iron by Amal El-MohtarNe le! by Darcie Little BadgerThe Duke of Riverside by Ellen KushnerCat Pictures Please by Naomi KritzerThe Lily and the Horn by Catherynne M. ValenteCalved by Sam J. MillerThe River's Children by Shweta Narayan