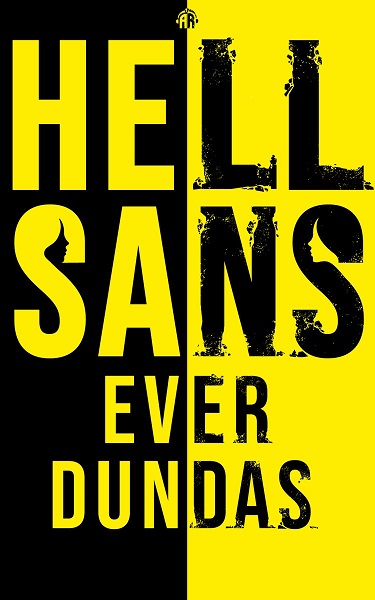 Corrupt governments, dystopian futures, and persecution… Ever Dundas’ HellSans has it all!

Set in a fictional UK, HellSans explores a world where governmental and public communication cause bliss to the majority of the population, but a severe allergic reaction to the minority. This ubiquitous typeface is the ultimate control device, marginalising and outcasting people. The HellSans Allergic (HSAs) are persecuted, and live on the streets or in a ghetto on the outskirts of the capital city.

Jane Ward, CEO of the company that manufactures the Inex (a cyborg doll-like creature that has replaced the smart phone as the essential aid and accessory) has everything: fame and fortune, until she falls ill with the allergy and becomes embroiled in the government’s internal power struggles. She loses her job and her wealth, ending up in the ghetto until she is rescued by Dr Icho Smith.

Icho is a scientist who has developed a cure for the allergy, but she is on the run from the government and the Seraphs (the ghetto ‘terrorist’ group), who all have their own agenda for the cure. Jane and Icho must work together, aiming to expose government corruption and bring the cure to the HSAs.

Seeing as HellSans is centered around the haves and have-nots, the book can be read from different perspectives and has been written in three parts, and readers can choose whether to start with part one or two!