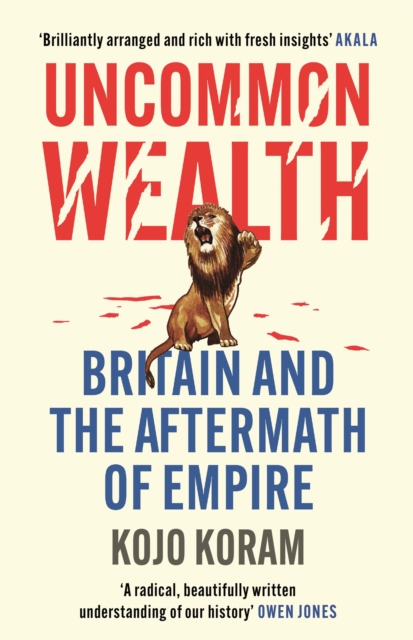 Uncommon Wealth : Britain and the Aftermath of Empire

Britain didn't just put the empire back the way it had found it. In Uncommon Wealth, Kojo Koram traces the tale of how after the end of the British empire an interconnected group of well-heeled British intellectuals, politicians, accountants and lawyers offshored their capital, seized assets and saddled debt in former 'dependencies'. This enabled horrific inequality across the globe as ruthless capitalists profited and ordinary people across Britain's former territories in colonial Africa, Asia and the Caribbean were trapped in poverty.

However, the reinforcement of capitalist power across the world also ricocheted back home. Now it has left many Britons wondering where their own sovereignty and prosperity has gone... Decolonisation was not just a trendy buzzword.

It was one of the great global changes of the past hundred years, yet Britain - the protagonist in the whole, messy drama - has forgotten it was ever even there. A blistering uncovering of the scandal of Britain's disastrous treatment of independent countries after empire, Uncommon Wealth shows the decisions of decades past are contributing to the forces that are breaking Britain today.

'BRILLIANTLY ARRANGED AND RICH WITH FRESH INSIGHTS, UNCOMMON WEALTH REMINDS US HOW THE FORGOTTEN STORIES OF EMPIRE AND DECOLONISATION CONTINUE TO IMPACT OUR DAILY LIVES IN BRITAIN - AND THROUGHOUT THE WORLD - UP TO TODAY' AKALA